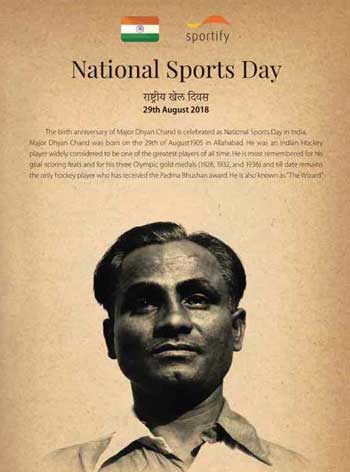 The National Sports Day in India is celebrated on 29 August each year. This day marks the birthday of Major Dhyan Chand Singh, the hockey player who won gold medals in Olympics for India in the years 1928, 1932 and 1936.

Dhyan Chand is considered as the greatest Hockey player in the history of the sport. He is known for his extraordinary goal-scoring feats, in addition to earning three Olympic gold medals (1928, 1932, and 1936) in field hockey, during an era where India was the most dominant team in Hockey. His influence extended beyond these victories, as India won the men’s field hockey gold medal in seven out of eight Olympics from 1928 to 1964.

Known as The Wizard or The Magician of hockey for his superb ball control, Chand played his final international match in 1948, having scored more than 400 goals (highest goal scorer in history of hockey) during his international career.The Government of India awarded him the third highest civilian honour of Padma Bhushan in 1956